A friend directed me to this link about a Siberian depiction of Santa Claus known as Ded Moroz: 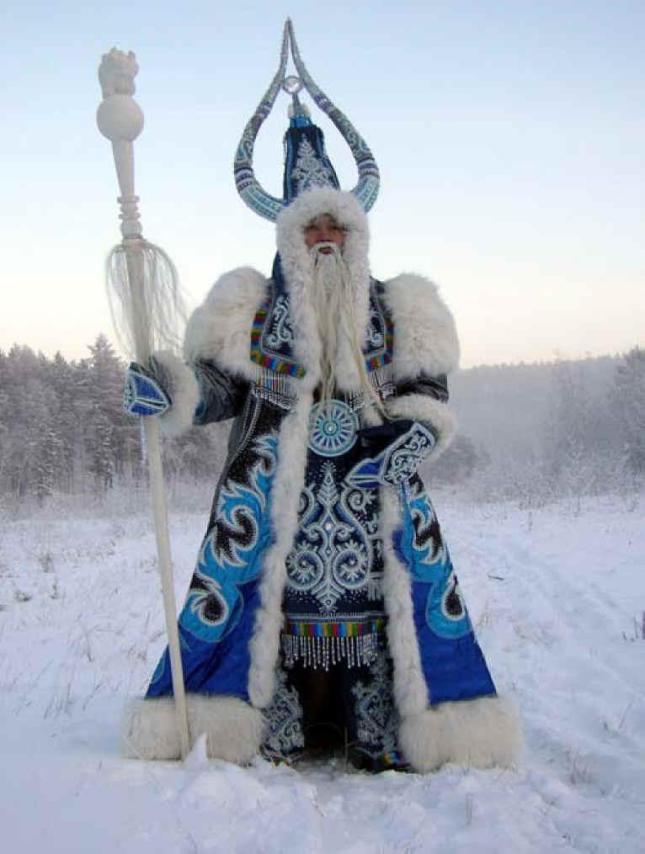 YOU SHALL NOT PASS! Unless you’ve been good little boys and girls.

There is nothing I do not love about this depiction.  The ice staff, the wizardly garb, the stance, the hat that would make Tim the Enchanter jealous, this guy is the real deal as an ice sorcerer.  He could have walked straight out of a faerie tale, or the Hyborian wastes.

Even better is Ded Moroz’s history.  Taken from Wikipedia:

“The earliest tales of Ded Moroz presented him as a wicked and cruel sorcerer, similar to the Old Slavic gods “Pozvizd”—the god of wind and good and bad weather, “Zimnik”—god of winter, and the terrifying “Korochun“—an underworld god ruling over frosts. According to legend, Ded Moroz liked to freeze people and kidnap children, taking them away in his gigantic sack. Parents were said to have to give him presents as a ransom in return for their children. However, under the influence of Orthodox traditions, the character of Ded Moroz was completely transformed, later adopting certain traits from the Low Countries’ (Belgian and Dutch) Sinterklaas (or Saint Nicholas), the prototype of Santa Claus.”

The name Ded Moroz is translated either as “Old Man Frost” or “Father Frost” and he travels with his granddaughter Snegurochka, the Snow Maiden.  In some tales Snegurochka was a girl made from snow who falls in love with a mortal boy, but the love warmed her heart and caused her to melt, so she died.

It doesn’t get more Russian than that.

Also, I may have to revise my opinion of Rankin Bass.  The story of Ded Moroz going from an evil magician who freezes people to a benevolent lover of children sounds very familiar.  Could the Winter Warlock from Santa Claus is Coming to Town have been inspired by Ded Moroz?

Now I want to see if I can find a legendary basis for Heat Miser and Cold Miser.

Posted by Fractalbat on December 19, 2013 in Cool Stuff