“The module you are about to read contains the basis for one of the most difficult adventures that my character, Mordenkainen the Mage, ever underwent.”

Mordenkainen’s Fantastic Adventure was co-written by Robert Kuntz and Gary Gygax as module WG5 of the “World of Greyhawk” adventure series. It was meant to be a stand-alone adventure set in the ruins of Maure Castle, not far from the Free City of Greyhawk. The module is based off an adventure created by Robert Kuntz when he took on the role of co-DM for Gary’s original Greyhawk campaign.

“Primarily, although not exclusively, I created my Castle, ‘The Ruins of El Raja Kye,’ from which this dungeon is derived, for Gary Gygax, who deserved an opportunity for some extensive play because of all the judging (in between all the writing) he had done for the players in his Greyhawk Campaign.”

I love getting glimpses like this into how the Lake Geneva gaming group worked. It’s a wonderful reminder that Dungeons & Dragons was created by gamers just like us, with the same concerns at the table that we still have today. These were our people, or perhaps I should say we are their people.

It’s also nice to see that Gygax wasn’t the only one who had a fondness for long, comma filled sentences.

The OSR has talked extensively about many classic modules, but Mordenkainen’s Fantastic Adventure seems to be mostly overlooked. This surprises me, because it has always been one of my favorites. I ran it several times for my first gaming group (remember re-running modules?) and used it again with my first university group. I suspect that its late arrival on the scene is why it doesn’t receive more attention, 1984 being beyond what many gamers consider to be the golden age of D&D.

Which is a shame because WG5 is a classic dungeon in every sense. The maps twist and turn and it’s three levels are dense enough that careful cartographers will be able to spot hidden areas. There are tricks and traps aplenty, some quite deadly while others can despoil the characters’ hard won treasures. The dungeon is largely a hack & slash with few options to negotiate with the dungeon denizens, but that’s not to say it doesn’t require thought. Adventurers who simply kick in each door and start swinging will have a harder time than those who use tactics and caution.

WG5 can be classified as a “funhouse dungeon” but not a completely arbitrary one. There is enough story to tie events together if the players pay attention to the clues. The castle was a legendary center of magic before it fell into ruin. Since then a powerful and evil wizard named Tomorast has taken up residence in the dungeon and surrounded himself with minions, apprentices, and the demon-cult he has formed. A cult whose numbers have been dwindling due to Tomorast’s penchant for using them as sacrifices to the greater demon Kerzit. Kerzit is a guardian demon who Tomorast has summoned to protect his greatest treasure, a grimoire known as the Tome of the Black Heart. Tomorast has used the dungeon as a laboratory and storehouse for his magical experiments and now his own deadly creations have mixed with those remaining from the castle’s history.

There are many other things about WG5 that I like. The adventure opens with a two-page section called, “The Adventure Begins,” which guides the players through their journey to the castle ruins and describes their initial decent into the dungeon. It’s clearly written assuming that the players are using the pre-generated characters and feels forced, which I normally wouldn’t like. However the pre-generated characters are legendary figures from Gary’s campaign, Mordenkainen, Yrag, Bigby, and Riggby, and it feels like this is based on what actually happened when Gary was a player.

That feeling is certainly worth a short railroad.

The dungeon itself is well laid out in the classic style. It’s three levels deep, which makes it large enough to pack in plenty of adventure but not so large that it takes over a campaign. Though by its nature there are plenty of options for the DM to expand it on their own. Each section begins with a short description of the general feel of that level including notes on the construction, which helps the DM to describe the environment and provide some clues on the dungeon’s history. For example the stonework on the third level is noticeably more recent, indicating that Tomorast has been expanding the dungeon to suit his needs.

That’s not to say the module is flawless. There is only one way to descend from level one to two and it is hidden behind a secret tunnel. I tend to look at designs like this with a practical mind and the dungeon’s creators wouldn’t have put up with such a difficult design. I’d add a more accessible way to reach level two, but I might bar the second path with a magical gate that can only be opened from below, or perhaps have it filled by a tunnel collapse. There are three paths between level two and three, but they don’t line up on the map correctly. It’s so far off that I wonder if it was intentional, indicating some kind of magical teleportation such as you find in the Castle of the Mad Archmage, but this is never stated.

The adventure is designed for characters level 9-12, which I like. It’s powerful enough to be epic but still within the range of what most gaming groups can legitimately reach through regular play. Danger is present from the moment the characters enter the dungeon and the module doesn’t hold off on true peril, with one of the most deadly (and spectacular) challenges found on the first level. Treasure abounds within, including potent magical items, but most of these objects are designed to be interesting and cool rather than overpowered.

The Tome of the Black Heart itself is no simple spellbook. Instead it’s a manual with instructions for creating objects and summoning powerful otherworldly beings rather than simply providing more spells for the wizard’s arsenal. I particularly like this, as this makes obtaining the Tome feel less like the completion of an adventure and more like the opening of several new quests.

This concept is reflected throughout the dungeon and fires the imagination of both the players and the DM. Every quest completed, every great treasure obtained, is just the key to the next adventure. 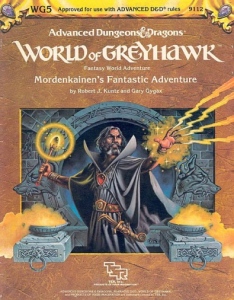 Posted by Fractalbat on January 13, 2015 in Dungeon Design, Gaming, Reviews