Dwarves of the Purple Wurm

The dwarf kingdoms are renown for their mastery of mining and delving into the deepest roots of the mountains.  So too are their warriors famous for their strength and audacity.  Perhaps none are more legendary for their fearlessness than the Knights of the Wurm.

Purple worms are among the most feared denizens of the underworld realms.  Adult specimens grow to frightening size, 50′ in length with maws large enough to swallow an armored knight whole.  These monsters burrow through the ground with frightening speed allowing for swift and terrifying attacks.  Their jaws are so strong that they gnaw through the hardest bedrock.  The beasts are further armed with a sharp stinger filled with a deadly venom, a weapon they can use on creatures who come at them from behind in their dark tunnels.  The rare cases of such monsters reaching the surface are the stuff of legends and adventurers who have survived such encounters have rightly earned their place in story and song.

Challenging a purple worm on the surface is foolhardy but seeking the worm out in its lair is suicidal.  Yet that is exactly what an order of dwarven knights do.  These warriors track the leviathans to their nests and, if they find young worms within, slay the adults.  Any dwarves who survive then capture the juvenile worms and take them back to the citadel of the order where the worms will be matched to a knight who will raise and train it.  The process takes close to a century, but dwarves are a patient, determined, and a long lived species.  The final result is a knight’s steed of horrifying power.

Through secret means the dwarves restrict the growth of the worms, holding them to roughly half the size of a normal full sized adult.  Worms that grow larger become uncontrollable, their skin too thick for the prods used to control and guide them and their appetite too voracious for the dwarves to assuage.

Finding a dwarf capable of being a worm rider is as rare as finding the worms themselves.  Such a candidate must possess a sense of direction and depth far beyond that of their kin in order to guide their mount through the ground. A Wurm Knight must be ever mindful that even a worm they’ve raised and ridden for decades has not been tamed, it has been subdued and can never be trusted.  Knights who forget this will meet a quick and gruesome end.

The Knights of the Wurm wear special armor, with a curved carapace-like shield rising up from their back and over their helmet.  This allows the dwarf to cling to the side of the worm as it burrows, sliding through the shattered stone cascading around them.  When dismounted this shield is ungainly and blocks the warrior’s peripheral vision, so they have fashioned a quick release to allow its speedy removal.

By necessity the Wurm Knights eschew the use of shields or two handed weapons.  Instead they use single-handed weapons that clamp onto their breastplates so that they will not be ripped away while riding the worms.  Many Wurm Knights fight with two weapons and train with throwing axes.

Wurm Knights generally ride alone, but when going to war they will be accompanied by as many as a dozen fellow riders.  These will be composed of two types of warriors.  Sergeants are warriors of the order trained to care for and ride with the worms, but who lack the sense of direction necessary to guide them.  Squires are candidates who have passed the tests of the Order and are training to become knights.

When a Knight of the Wurm becomes involved in the affairs of the surface dwellers they can change the course of wars.  A single Knight and his or her mount can undermine the walls of a city or kill the roots of an elven forest.  Even dragons have been put to route by a sudden assault from beneath the ground.

The Knights of the Wurm represent the mastery of the dwarf people over their underworld realms.  Dwarven adventures may spend much of their careers seeking to earn enough renown to be considered for their ranks.

Posted by Fractalbat on December 2, 2013 in Fantasy, Gaming, World Design

What Character do you Want to Play in the Future?

27. What character do you want to play in the future?

There are two candidates.  I’m on something of a dwarf kick right now, no doubt The Hobbit movies have something to do with it, plus I’m running the Lamentations of the Flame Princess module Hammers of the God for my Google+ group.  Although I’ve always liked dwarves with their subterranean cities and hardened attitude.  I always wished that Tolkien had written more about his dwarves.  One of the lasting images I have is Tolkien’s descriptions of grim dwarves in their heavy armor and great helmets advancing through dragon fire during the ancient battles with Morgoth.

I love dungeon delving, so it’s hard not to like a race built around it.

The other I’d like to take a crack at is a cleric.  I would love to explore the cleric in greater detail as a player, it’s a class I largely overlooked back when I was playing a lot.  I spoke more in detail about this in an earlier post.

Of course in an AD&D setting I could combine these ideas and play a dwarf cleric, though a human cleric has more appeal to me.  Sometimes mixing concepts is fantastic, but sometimes I want to explore the archetype. 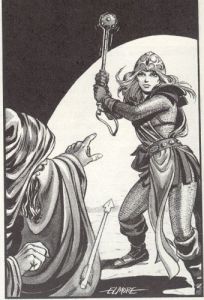 Posted by Fractalbat on September 27, 2013 in Gaming