Here’s a classic web tool if ever there was one.

Twists, Slugs, and Roscoes: a Glossary of Hardboiled Slang has been on the Internet since 1993. As the name suggests, it’s a glorious collection of terms straight out of the noir pulps and movies, and comes complete with its own bibliography. It’s perfect to spice up any gangster-era game.

So glom that list you ginks, before I make you chew a gat.

One of the perks of living in Southwest Ohio is that I’m not terribly far from the National Air Force Museum in Dayton, OH. It’s a wonderful facility, filled with aircraft and artifacts from every era of flight. Including of course the dawn of flight, appropriate for a museum located not far from the Wright Brothers’ home.

Not long ago we took a family trip to the museum. In the section where they have a Wright Flyer they also have an issue of the Washington Post dated Saturday, July 31st, 1909 that includes the announcement of the Wright Brother’s first flight.

This is a cool thing in itself, but what caught my gamer’s eye were two more articles that also ran on the front page; one is about a new secret weapon rumored to have been developed by the U.S. military and the second regarding a medical breakthrough that would be quite at home in the annals of mad science.

Please excuse the image quality. I had planned to find better shots online, but the Post’s archives are behind a paywall.

The first story is about a death ray that can hurl lighting to, “Make Enemy’s Guns Useless, Slay Men, and Cripple Ships.” The story comes from an anonymous source within a European government, and is used as an explanation for why the U.S. military seemed to have very little interest in the success of the Wright Flyer. The suggestion is that aircraft would be insignificant against an army capable of swatting them out of the sky with lightning bolts.

The second story is unrelated to flight, but no less intriguing:

The topic is a medical procedure being explored in Paris, by which a surgeon could sever a nerve in the brain. Doctor Bonnier believed that removal of this nerve, “relieved greatly persons suffering from melancholia and timidity.” Speculation was that the procedure had, “the possibility of turning a coward into a hero by a surgical operation,” a concept that was of interest in 1909, when everyone knew that another major European war would happen sooner or later.

I couldn’t locate more information on Dr. Bonnier, though I did find reference to the article in a professional journal of Phrenology. However it’s worth noting that the article uses the past tense regarding the doctor’s procedure.

He’d already performed the operation. More than once.

To sum up; we have the front page of a world-renowned newspaper running articles about aircraft, death rays, and medically created supermen.

The Doctor and Krynn

A post on the excellent “Old School FRP” Tumblr gave me a cool bit of information; Keith Parkinson snuck the TARDIS into several of his Dragonlance pictures.

For fandom, this is better than “Where is Waldo”! Of course, now I’ll never be able to look at one of Parkinson’s images without scanning it for signs of the Doctor.

Hmmm… if Raistalin and The Master teamed up…

Posted by Fractalbat on March 8, 2016 in Cool Stuff, Fantasy

I do not use a lot of terrain in my games. We usually play without miniatures or I use my trusty old Battlemat. However, when I have used terrain it’s been from Fat Dragon. These people use the full potential of .PDF files for papercrafting.

The artwork is great, the designs are excellent, the instructions are clear, and they use layers to let you increase the visual variety. I’ve built a few of their sets and when I wanted to create a city for my Car Wars game, picking Fat Dragon’s products was a no-brainer.

Until March 1st their entire catalog is 50% off, so if you’re looking to get some quality papercraft terrain for your games, this is a good time to make the jump and give Fat Dragon a try.

Posted by Fractalbat on February 29, 2016 in Cool Stuff, Gaming

The Fleet is In

My new space armada has arrived!

I picked up a set of plastic space ship miniatures on a recent Amazon order. I’ve been looking for a decent and cheap source for ships to use in various games and this pack looked like just the ticket. You can find them here. 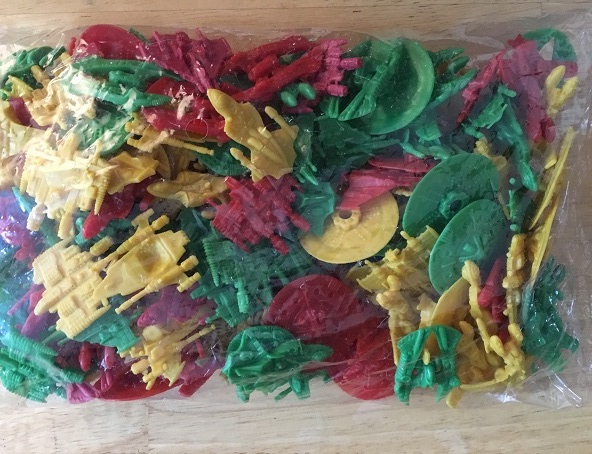 These plastic ships come in a pack of 144 for under $7.00 and use a variety of molds. Their quality is fine, they won’t blow you away but they are not bad at all, and the quantity you get for the price is impressive.

Some of the molds look familiar to me, while others I’ve never seen. And then there is this one, that hit my nostalgia buttons very hard: 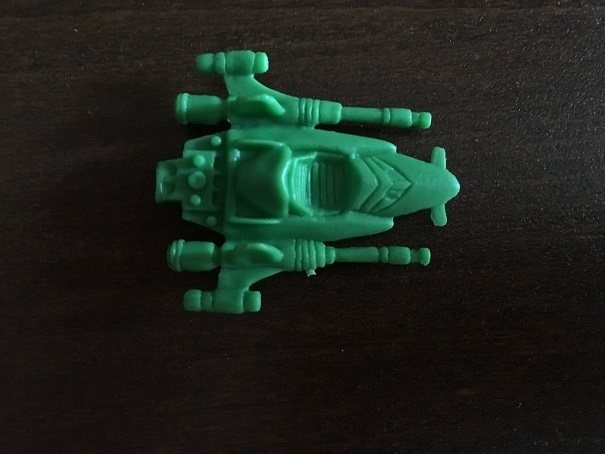 Way back in the early 80’s I was a brand new gamer. I had just gotten my first copy of TSR’s Star Frontiers and falling in love with sci-fi gaming. I was getting into miniatures and had a few boxes of fantasy figures, but was having trouble finding sci-fi sets.

Then one day I was in the toy section of a department store and there on the shelf was a set of Traveller 15mm lead figures. The set had various space adventurers and this air car, complete with a removable figure. I snatched it up. (Lead gaming figures in a department store toy aisle, rare in the 80’s but impossible to imagine today).

I never found any more figures for Traveller, nor for that matter did I find the game itself. The only store in town with gaming stuff didn’t carry it and I did not yet really get ordering by mail, but I played with those figures for years.

I’m pleased with my purchase and finding this blast from the past is icing on the cake. I don’t have any specific plans for them, but sooner or later I’ll unleash them on my tabletop.

Strange, unearthly island, jutting out like a stone blade from the South Pacific?

Courageous scientists risking life and limb to discover their secrets and reintroduce them to the populated world?

I think we all know how this is going to turn out. 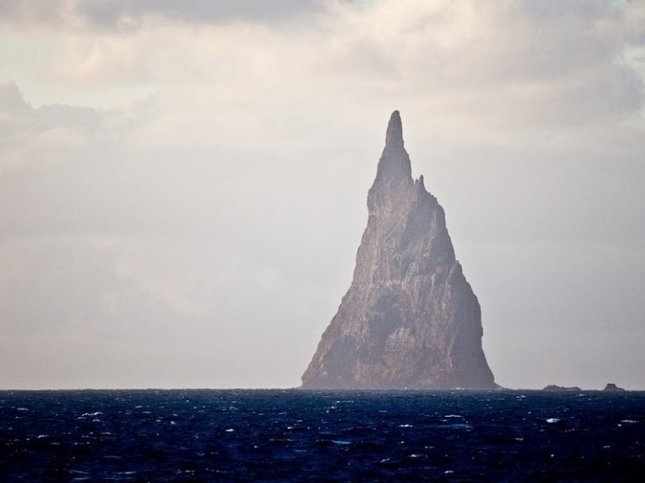 By all means, check out this story from NPR about how the “tree lobster”, long thought extinct, was found to be thriving in the most unlikely of places. The science nerd in me loves the story, and the gamer geek in me sees many possibilities.

Currently I’m leaning towards the rats of Lord Howe Island catching wind of the plan to reintroduce their vanquished foes, leading to their attempts to sabotage the human scientists’ plans. Even if they have to risk revealing their uplifted intelligence to do it. 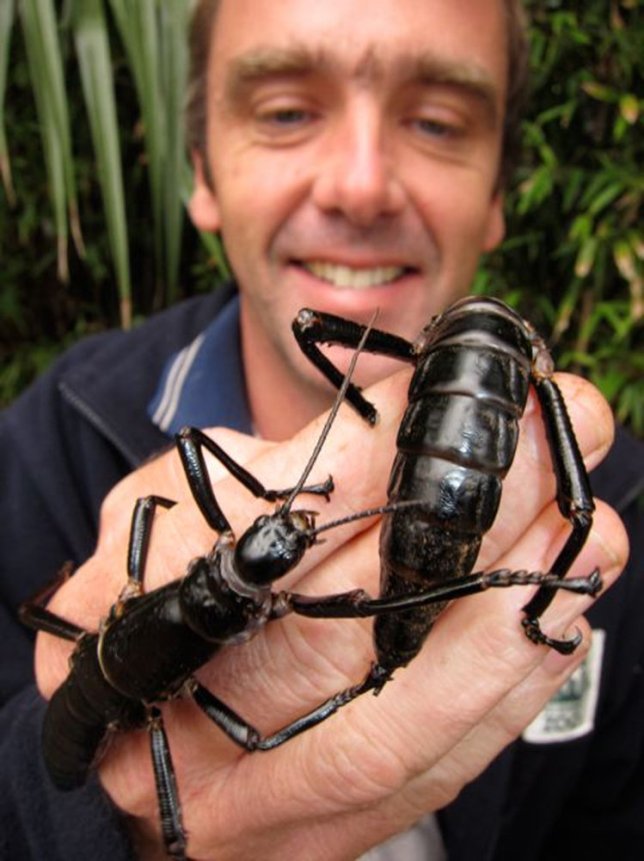 Posted by Fractalbat on January 18, 2016 in Cool Stuff, Weirdness

I spent so many quarters on this game.

Man, the best was when you’d find a full sit-down cabinet. That was the stuff.

Save us, Space Bear!

This is another one of those wonderful, “What the heck is going on,” sci-fi images. It’s made even better because the look on Space Bear’s face is just as amazed and confused.

We’ve got aborigines, we’ve got what may be a post-apocalyptic ruin in the background, and we’ve got aliens. Why are the flying saucers shooting at the one on the ground? Did Space Bear escape some fiendish alien base by stealing it? Is Space Bear a mutant? An uplift?

This looks like a job for Mutant Futures! Or perhaps Justifiers? It could be a Beta. 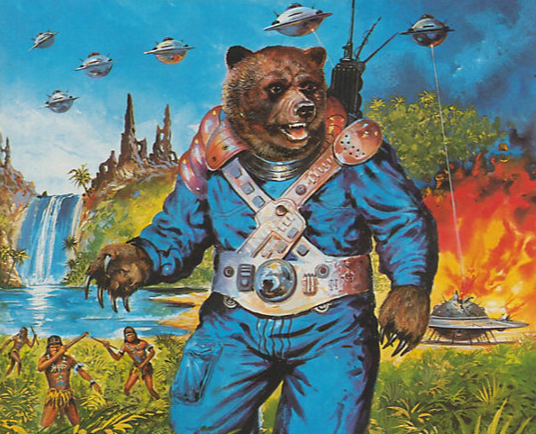 Posted by Fractalbat on January 6, 2016 in Cool Stuff, Weirdness

Living on the Edge of the World, and it’s Sinking

Kivalina is a town living on the edge of the world, and that edge is sinking.

“In this town of 403 residents 83 miles above the Arctic Circle, beaches are disappearing, ice is melting, temperatures are rising, and the barrier reef Kivalina calls home gets smaller and smaller with every storm.

There is no space left to build homes for the living. The dead are now flown to the mainland so the ocean won’t encroach upon their graves. Most here agree that the town should be relocated; where, when and who will pay for it are the big questions. The Army Corps of Engineers figures Kivalina will be underwater in the next decade or so.”

Climate Change is a real thing and a source of great concern, but the Belfry is about gaming, and this story offers a lot of inspiration.

People are stubborn. We set down roots, build a community, and that parcel of land and the people who live there become bound to our psyche so deeply that we’ll do whatever it takes not to lose them. Come hell or high…

Well, you get the idea.

This is both a strength and a weakness. Sometimes it makes us stand in front of the oncoming storm until its too late, but it’s also the determination that has allowed us to spread across the globe, push back the frontiers, and go into space. You can be sure that if trouble befalls the first Lunar colony, the people there will risk everything to keep the community alive.

Kivalina is hardly a garden spot. Even before the weather began to warm up, the narrow spit of land was battered by storms and limited in resources, but for 110 years people have chosen to live there, carve out a place in the world, and defy the elements to live the way they want to live. It’s the stuff of which adventurers are made.

“When Hawley is asked why her people don’t move — somewhere, anywhere to be safe — she is polite but firm. The land and the water make the Inupiat who they are. If they moved to Kotzebue, they would be visitors.”

From a gamer geek standpoint it’s hard not to look at this story and think about all its parallels in fiction. From the isolated planetary outpost of sci-fi to the classic Keep on the Borderlands, or even the determination of King Hrothgar not to completely abandon his hall to Grendel in the epic Beowulf, legends are born from people who refuse to leave their homes. Reading through the LA Times story gives those of us living in comfortable suburbia a glimpse of how people on the frontier live.

And if you need more inspiration, just look at this image of the town. 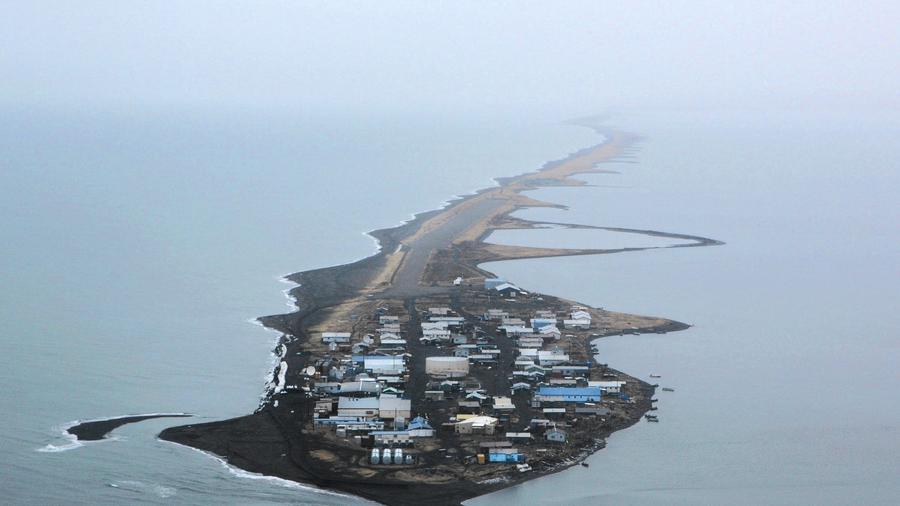 Demi-Humans and Dungeons, in the Real World

Recently the fossils of a previously unknown species of ancient human was discovered in a cave in South Africa.

That’s awesome in and of itself, but this video shows how they got to the remains to study them, including showing someone squirming into a tiny tunnel. They had to bring in a group of cavers who were small women who were capable of reaching the farthest chamber, which the map shows as being a vaulted 90’+ high cave.

Fantastic. No way an adventurer in plate armor is going through that tunnel.

I have on occasion designed low corridors in dwarf-built dungeons, but this makes me want to hide treasure beyond passages too small for anything but halflings and wood elves to crawl through.

Has anyone else ever put features like this into your dungeons? If so, I’d love to hear about them!