RSS
← Let us Address the Elephant under the Room
At Last! →

In honor of Halloween I gathered a few friends together to venture into the classic Ravenloft adventure.

No box set, no overly complicated demi-plane, just the original stand-alone module I6 Ravenloft by Tracy and Laura Hickman in all it’s vampiric glory. It’s a wonderful module that I haven’t run in many years, but re-reading it brought back fond memories of the blood-soaked halls and the night terrors faced by past adventurers.

With four players, most of whom have never played 1st edition AD&D, I decided to pre-generate a selection of high level characters to choose from. This also proved to be a fun exercise for me, and once I covered the core character types I branched out into a few mutli-class and sub-class options. (More on that in a later post.) I left the character details for the players to flesh out and that also proved to be great fun, as they were quick to let their imagination loose. Selected for the adventure was a chaotic good human magic-user, a neutral good half-elven cleric/magic-user, a chaotic neutral human thief, and a lawful evil human cleric.

Hey, desperate times call for desperate measures, and the lawful evil cleric is under contract.

The hook for the party was that the king of a nearby land was alarmed that the realm of Barovia seemed to be expanding. Packs of wolves and zombies had attacked villages and most troubling of all, the circle of mist surrounding Barovia was expanding. The king had sent a company of his royal guard to deal with the threat, but none had returned. In desperation he turned to a group of adventurers promising them wealth, name fame, and lands to form their own dominions in.

The adventure went well and I did my best to play up the hammer horror film feel of the game. Not far past the gates of the road to Barovia they found the corpses of the king’s men hanging from trees on the sides of the road. The group spent a good deal of time in the village, trying to learn all the information they could and seeking allies, while also trying to protect the burgomeister’s daughter from Strahd von Zarovich’s dark embrace. They did manage to gather some valuable intelligence, aided by creative use of the Speak with Dead spell, but at a high price.

On their second night in the village, the half-elven cleric/magic-user decided she would stay in the chapel with the priest in order to witness the parade of ghosts that happens before dawn. The rest of the party decided to stay in the burgomeister’s manor again, to continue protecting the daughter. The night before voices from outside had attempted to get them to open the way, including temptations for the evil cleric, and the pitiful pleadings of a little girl who was apparently killed by wolves when the character on watch wouldn’t let her in.

With the party split Strahd decided to attack the lone adventurer. His agents caused the bell of the chapel to ring, then come crashing down into the main hall. This was followed by a wave of rats, advancing on the frightened priest and the half-elf. She unleashed burning hands on the rodent tide, but there were too many. Grabbing the priest she smashed through the window and fled the burning church, a cloud of bats dropping to assail them as they dashed through the night. She heard the priest scream behind her, but the bats clouded her vision too much to see his fate. No door opened to her frantic banging and no trick or spell she pulled could stem the wave of vermin. Towards the end she realized they were herding her to the manor. She did bang on the door, but instead of asking to be let in she screamed, “Don’t let my sacrifice be in vain!”

Inside the manor the cleric cast Hold Person to stop the thief from opening the door, while outside a great bat flew down and changed into Strahd himself. The party was forced to listen through the door as the vampire beat the half-elf to death and carried off her body, and we had our first character death before they reached the castle.

The rest of the night went well, with several more moments that were epic, horrific, and absurd. They met another adventurer, a flamboyant knight errant of the Landsknecht on his way to test his luck in Castle Ravenloft, who went on to find romance in its haunted halls. They faced the undead corpses of their dead friend and the little girl. They killed the Heart of Sorrow and restored the Sunsword to its full power. They lit many things on fire.

The night ended when they blew up most of one of the central towers, taking out a coven of witches in the process and sending their cauldron hurtling through the night sky, presumably to land somewhere in the village far below.

As night in the real world beckoned we decided to end the session there. The party has gained some powerful advantages but Strahd still prowls the castle halls. To win their freedom the adventures will have to destroy him and cleanse the evil in Barovia.

I had a blast running Ravenloft again and the players were in a fine groove. The player making her generic human fighter a dashing Landsknecht and then romancing the swooning Gertruda was my favorite flight of fancy. This was followed closely by the lawful evil cleric of Romney, God of the 1%, who made a point of pontificating at every chance. Even the character death was delightfully harrowing and gruesome, just perfect for an October adventure.

We have plans to finish the game this weekend, so stay tuned as we see if any of the adventurers will get out alive. 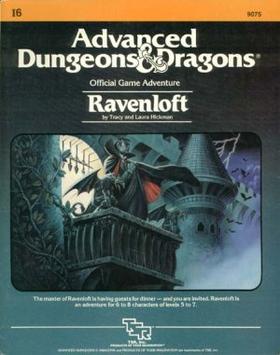 Posted by Fractalbat on October 26, 2015 in Fantasy, Gaming, Horror

← Let us Address the Elephant under the Room
At Last! →