RSS
← Video Games that Need to Come Back
Ravenloft →

Let us Address the Elephant under the Room

The Atlas Obscura recently posted an interesting article regarding the 1962 discovery of an elephant’s bones under the Vatican.

The elephant’s name is Hanno and he was a gift to pope Leo X from the king of Portugal in 1514. The article goes into the pope’s affection for Hanno, the political importance of such exotic gifts, and gives a glimpse of some other fantastic creatures that were kept in royal and papal menageries. It also touches on the excitement of the populace to see creatures from far away lands.

The whims and pleasures of the powerful are always great sources for adventure, in any genre. Far flung science fiction games can send teams to bring back monsters from frontier worlds. Fantasy games may have dungeon masters brushing off the old Dragon Subdual rules, or questing for a book of True Names in order to add a demonic Balor to an emperor’s menagerie of dangerous beasts. Cyberpunk games may send deckers deep into the dark web, braving black ICE in order to retrieve an AI construct devoted to poetic recitation, or a vivid simulation of extinct animals. Money alone doesn’t satisfy the desires of those at the top of society’s food chain, and they need minions to venture out and find new entertainments.

Then there are other uses for an elephant skeleton buried under the Vatican, as an enterprising necromancer may discover in a dark urban fantasy game.

Gaming inspiration aside, the article about Hanno is well written and gives a fun glimpse into history. 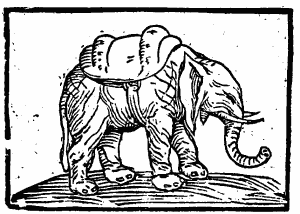 Posted by Fractalbat on October 22, 2015 in Cool Stuff, Gaming, History

← Video Games that Need to Come Back
Ravenloft →