For my birthday gaming blow out I made use of Car Wars 5th Edition.

Several people have commented that they didn’t know there had been a 5th Edition, which is understandable because it didn’t last very long. The game was released in 2002 to much anticipation, but it sold poorly and quickly vanished from the gaming scene. It’s an example of how you can do a good job revising a classic rules set and then kill the line with bad marketing.

The Good: The goal of 5th Edition was to streamline the Car Wars system so that it would be easier, play faster, and provide a more dynamic game. In these goals they were successful. Over the years Car Wars had built up significant rules bloat. New weapons and technology combined with tons of new rules had expanded the game from a simple system that fit in a small plastic box to a book the size of a full GURPS sourcebook. To its credit this allowed the serious autoduelist to handle a huge range of situations including semi-trucks, aircraft, boats, and even tanks. It also provided a dizzying array of construction options for customizing your vehicles. But at the same time it weighed the system down. It also changed the game from being easy to learn to intimidating for a new player.

5th Edition brought the game back to basics, presenting the players with a wide selection of pre-built cars that offered good variety while focusing on the core concept of racing cars and blowing each other up.

They also made significant changes to the movement system. In classic Car Wars a turn was divided into 10 phases, which later editions cut to five. Each phase players would check a matrix and it would tell you if you moved that phase based on your current speed. Movement was usually an inch per phase, though at high speeds two or three were possible.

5th Edition dropd the number of phases to three and cars move in every phase. The distance you move is increased to a flat 1″ per 10 miles per hour. This makes the calculations easy and cars move a lot farther each phase, making for a fast paced game. For me this is the single best change they made to the game, as it gives you a much better feel for roaring down the road than.

Another significant change is to the game’s scale. Classic Car Wars was designed using 1″ long counters for cars and 1/2″ counters for motorcycles. This allowed players to run large maps using a smaller game table, but it did limit the options for miniatures. 5th Edition was designed with 1/60th scale cars in mind, making it possible to use Matchbox and Hot Wheels cars without any rules conversions. This does put space limits on the playing field but you can get a lot of arena into a regular table space.

To sum up, 5th Edition succeeded in its goals to present a faster and more dynamic game that is more exciting and more accessible to new players.

The Bad: With a successful revamp of the rules done, how did they go wrong?

In a word, presentation.

In 2002 collectible games were still earning money hand-over-fist. Steve Jackson Games seems to have been trying to tap into that mindset with 5th Edition.

First off, you couldn’t buy a single book or boxed set. Instead you bought a series of game books. Each book came with a set of rules, a set of counters, and stats for two cars and a variant design for each (effectively four cars). Each book was inexpensive and gave enough material that you could play a one-on-one autoduel with a single book. The idea was that players would each buy a book, giving everyone a set of the rules and enough cars to play with. They published nine books, three for each size class of car.

However most fans wanted to own a complete set of cars and the majority of each book was identical. it was impossible to ignore that you were essentially buying the same thing over and over.

Second was the components. On the plus side, the artwork was good and kept with the classic Car Wars designs. They were also generous in the number of components they provided, giving you no lack of oil slicks, mines, spikes, rubble, and the like. However these counters were not punched and you had to cut them out yourself. This is especially annoying on the mines and spikes, which are circular counters.

You will notice that for my game I used quarters and pennies for spikes and mines.

Then there was the release schedule. The plan was to release only one division a month, going from the smallest cars to the largest. So for the big 5th Edition launch the only cars available were the Division 5 sub-compact cars. These cars, such as the iconic Killer Kart, are light vehicles usually with a single weapon.

In other words, boring.

Oh you can have fun with them for a bit, but the excitement of driving these eggshells with popguns burns out quickly. Car Wars is about vehicles bristling with weapons and armor, but to get that we had to wait another month.

This crushed any momentum the game had built up.

There was one more major flaw with the 5th Edition release. One of the most popular aspects of Classic Car Wars is the ability to build, customize, and upgrade your car. Players would gleefully tinker with their designs to get the deadliest vehicle possible. Duels would be as much about design as driving skill and it was fun not knowing what surprises your opponents had installed since the last game.

Promises were made that one was forthcoming but that it wouldn’t be released until all the other books had come out. For many autoduelists this meant that not only were you buying the same book repeatedly, you weren’t even getting a complete game. The last nail had been driven into the coffin.

The Ugly: Dissatisfaction among the fans cast a pall on the sales of 5th edition. In the end they published the nine core books, a compilation book of the Division 5 cars, and a single arena book.

And that was it.

The vehicle design system was never published. Rules for motorcycles never came out. Even updates on the website ceased in short order and nothing more was said. 5th Edition was done.

The Future: The failure of 5th Edition is a sad story, especially for long time Car Wars fans. However there are a few rays of hope for aspiring autoduelists.

The first is that all the 5th Edition books are available in .PDF format from Warehouse 23, Steve Jackson Games online web store. You can find them here and they’re reasonably priced. The individual books sell for $2.99, about half the cost of the original printed books, and the Division 5 compilation book costs $7.95. So for around $26 you can have them all in digital format. Desktop printers have come a long way since 2002, so printing all the cardstock counters you want is no longer a daunting task. Throw in a $5 pack of Matchbox cars and you’re ready to roll.

Also, an enterprising fan was able to reverse engineer the vehicle design system. The rules are posted in the Steve Jackson Games forum at this location. There are still no rules for motorcycles or large vehicles, such as vans and trucks. This is a shame, as these were popular in classic Car Wars, but it still gives you enough to play with.

Another ray of sunshine came from an unexpected source. Back in 2012 when the OGRE Designers Edition Kickstarter was breaking all kinds of records they set a stretch goal at the $700,000 mark. Hitting the goal would mean that Steve Jackson would launch a Kickstarter for Car Wars in 2013.

The stretch goal was hit but 2013 came and went without the Kickstarter happening. However there have been two related Car Wars announcements. The first was a re-release of the original Car Wars mini-game that came in a plastic baggy. The second was announcing the re-release of Classic Car Wars in the small plastic box. Mini-Car Wars released earlier this year and the second is listed as “In Production”. Both of these are supposed to be preludes to a new edition. There have also been periodic announcement about staff assigned to the project, indicating that Steve Jackson Games is still working on it.

So while the wheels are turning slowly, there is still hope that a 6th Edition of Car Wars may roll off the assembly line someday.

In the meantime, remember to Drive Offensively. 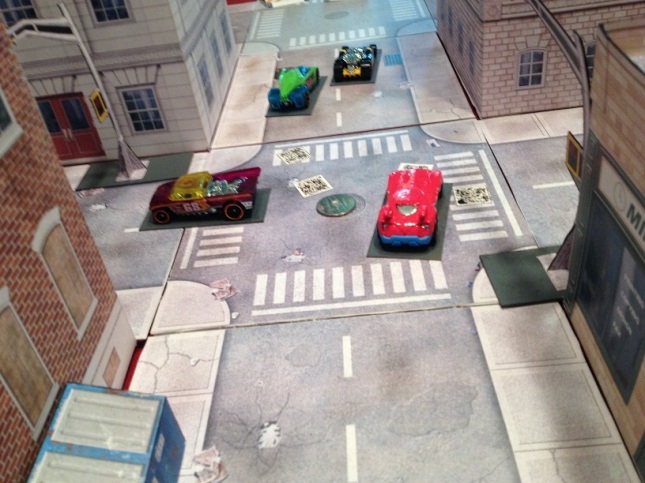 Posted by Fractalbat on September 4, 2014 in Gaming

7 responses to “The Unfortunate Story of Car Wars 5th Ed.”